Geek Quote of the Week! 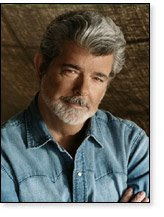 Booyah! In one, pithy line a generation of discontent is encapsulated!

Now it's time we all admit it.


All the lame acting, dull direction, wooden characters being moved like checkers across a board instead of growing and interacting is worth it for the magic those first movies have filled ourt lives with. And even his disappointing follow-up films have things for us to take away and cherish (and they're more precious for all the near misses those films contain.)

We have been able to play in his world for a generation. And today the next generation is even more excited about George's world than we may have been!

Sure, we whine and complain but we keep coming back. Why would we do that unless it's all worth it? I'd hate to live in a world where I didn't have star Wars growing up.

George must be doing something right.

Now if only he'd let me in on the script meetings. God, I know I could save him so many problems.

Oops, I'm back to ranting.
END OF TRANSMISSION
Posted by Gorillamydreamz at 6:39 PM