Welcome to the rebellion.
As rebels fight off the angst of our uphill battle to free the universe from tyranny, our inner and outer battles are captured perfectly by this week's smuggled Sunday Comic from the Imperial News: Jedi Brown.

With thanks and apologies to the master, Charles "Sparky" Schulz, creator of the immortal Peanuts.
For more Star Wars comics, check out the Imperial News.  And while you're there, enjoy the fan film that inspired this whole site, Death Star Repairmen!
END TRANSMISSION
Posted by Gorillamydreamz at 5:30 AM No comments: 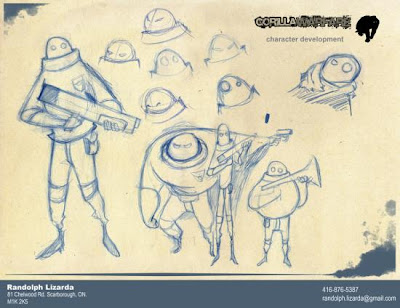 Rebel commander Pincro Mator here (A fantastic Star Wars name if ever I heard one thanks to the handy Jedi name generator at blueharvest.net).

A surprise assault by devious, imperial forces (in the form of a sudden hard drive crash) have shut down this base's computer systems. A replacement system has been purchased from the Hutt and is being smuggled here under the noses of the empire. For the time being (about two weeks), we will be posting infrequently, if at all.

Thank you for your patience.

Before I do sign off though, a big congratulations goes out to 21 year-old Sheridan College Applied Arts and Animation student, Randolph Lizarda. Lizardo, herewith dubbed Dolvan Galia the Corellian by yet another Star Wars name generator, has just been accepted to this summer's Jedi Academy, George Lucas' prestigious and much-sought after internship at Lucasfilm Studios in San Francisco. 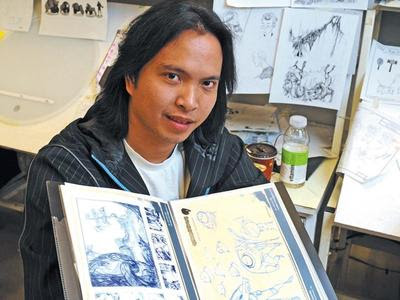 The Filipino Canadian Lizarda, er, Dolvan, was one of four applicants accepted out of 1, 500 applicants. With seven artistic brothers and sisters, Lizardo is used to competition. But after immigrating to Canada when he was 12, he found his own, unique direction.

"I was into it when I was little, then I got more into it in high school. In Grade 10, I took one of those career surveys to find out where you fit in. I fit into the animation industry," he said

The Toronto star shares details of the young padawan's journey here and here.

You can also check out his very impressive Sheridan portfolio here. 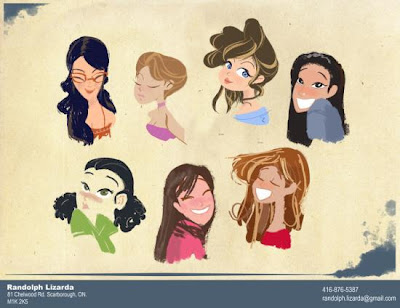 Animation is a challenging thing to do right. Making a character move is relatively easy. But it takes a real observation and judicious choices as to what subtle movements will convey emotions and desires and reatiosn to things around the character that bring an animationto life. Lizarda's portfolio has that in spades.

END TRANSMISSION
Posted by Gorillamydreamz at 6:37 AM No comments:

The Cosmos Tips Its Hand: I want to believe... 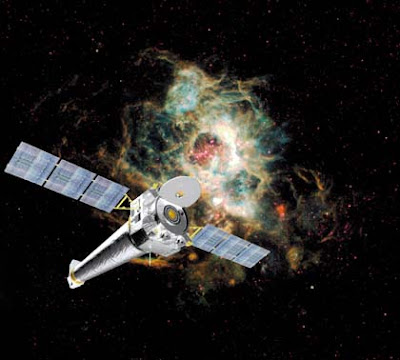 The Chandra X-Ray Observatory is making a few waves around the globe right now with one of its latest, spectacular, deep-space pictures.

Launched by the Space Shuttle Columbia July 23, 1999, Chandra is one of the most incredible pieces of astronomy equipment ever constructed (and the largest payload ever delivered by the Space Shuttle). With Earth's atmosphere absorbing the huge majority of X-rays hitting us from space, observatories on Earth cannot detect them. However, from its comfy high-orbit in space, Chandra is able to study them at a level previously thought impossible.

A few quick facts from Harvard's site:
More on Chandra's mission can be found at NASA's Chandra page. Chandra, whose name means "moon" or "luminous" in Sanskrit, is one of NASA's four "Great Observatories" in space. Each of the big four studies a different element of the cosmos spectrum.

The granddaddy of them all is the Hubble Space Telescope (HST), which observes visible light, near-ultra-violet light and near-infrared light. It's been in orbit for almost twenty years. Rather than retire, or "de-orbit" the Hubble, a new Space Shuttle mission is scheduled for this year. The Telescope will be refurbished with fresh batteries, new gyroscopes, a new camera, the Cosmic Origins Spectograph and, I suspect, a fresh coat of paint.

The Compton Gamma Ray Observatory (CGRO) studied primarily gamma rays and some hard x-rays before a gyroscope failure grounded it for good in 2000 shortly after the launch of Chandra. The Spitzer Space Telescope (SST) joined its esteemed colleagues in orbit in 2003. It focuses on the infrared spectrum.

So what picture could spur my sudden fascination with Chandra? Feast your eyes on the young, upstart Pulsar PSR B1509-58, or B1509 for short! 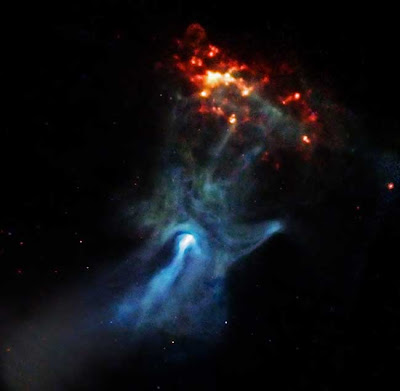 That's right, a glorious, COSMIC HAND! You can already the imagine the responses around the internet, can't you? Admit it.

We have people discussing it as the Hand of God and confirmation of his presence in the universe. I see this sort of tack taken by people who denounce science as being 'anti-faith' and against God (until they find something about science that suits their prosteletyzing purposes).

Heck, my own first thought was, "Hey, God's reaching for his alarm to snooze another millennia or so. Pleeeeease?... Just ten more centuries. I promise I'll be up in time for the Rapture."
I'm surprised we didn't see more of this sort of commentary from another one of Chandra's photos, NGC 7049, the Crown Of Thorns Galaxy! 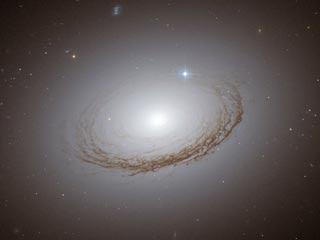 The responses nearest and dearest to my fannish heart were the sci-fi geeks who instantly made a connection between this pic and episode 33 of the original Star Trek, "Who Mourns For Adonais?", guest-starring Leslie Parrish and Michael Forest as the Greek God, Apollo. 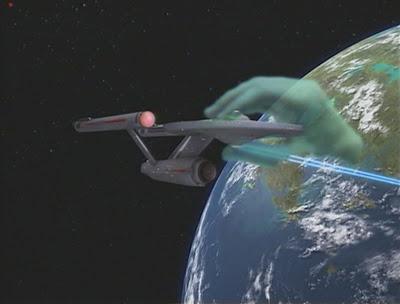 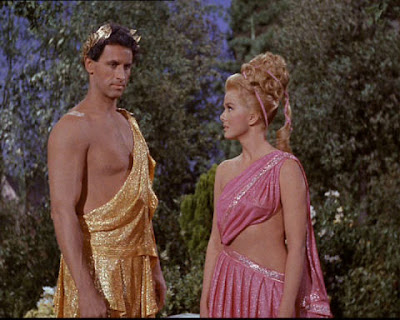 "You Greek Gods are all hands."
I was also impressed by the comic geeks at the ComicsCloset blog who remembered a similar image in one of DC Comics' earliest "event" mini-series, Crisis On Infinite Earths. 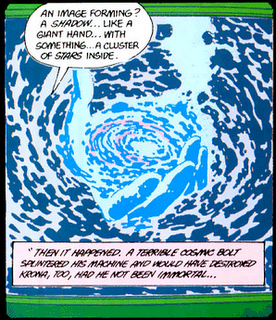 My first reaction to the pulsar was less shock and awe than dubiousness. The internet has made it easier than ever to float fake news and made-up discoveries on April Fool's Day. Because of that, I tend to disbelieve everything I see around that time as a matter of course, until it's proven to be true. After checking out the pulsar article on the pic at Space.com, I went straight to the source, Chandra's home website at Harvard university. To my surprise the picture was taken and posted April 3. This was not an April Fool's Day joke.

Harvard describes the science behind the event:

In this image, the lowest energy X-rays that Chandra detects are red, the medium range is green, and the most energetic ones are colored blue...

...Neutron stars are created when massive stars run out of fuel and collapse. B1509 is spinning completely around almost 7 times every second and is releasing energy into its environment at a prodigious rate - presumably because it has an intense magnetic field at its surface, estimated to be 15 trillion times stronger than the Earth's magnetic field.

The combination of rapid rotation and ultra-strong magnetic field makes B1509 one of the most powerful electromagnetic generators in the Galaxy. This generator drives an energetic wind of electrons and ions away from the neutron star. As the electrons move through the magnetized nebula, they radiate away their energy and create the elaborate nebula seen by Chandra.

The rest of the article goes in to greater detail.

The cynic in me still wonders if there isn' t some level of "art" to the processing of these images. After all, weren't certain choices were made in highlighting certain levels of X-Rays as different colours? But if it's simply Chandra is programmed simply to differentiate types and levels of radiation with a specified colour scheme, colour me amazed.

My personal favourite Chandra image are these black hole outflows from Centaurus A. They bring to mind a galactic phoenix spreading its solar wings. 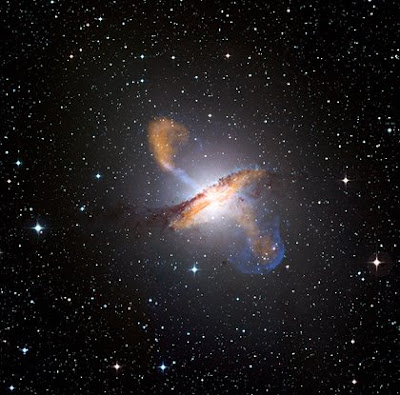 I guess the truth is, the universe being infinite, why couldn't a nebula take on such a shape? It's really just us imposing that form on it. For all we know the the Gastalateesians of Umbrata IV probably think it's shaped just like their genitalia. We strive to find ways to connect with nature all the time and I for one am grateful for moments like this where the galaxy gives us something joyous to connect with.

Just let me know when they find a nebula shaped like Leslie Parrish. 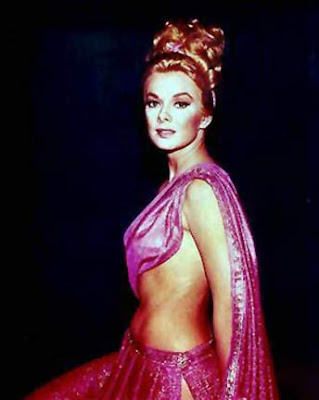 END TRANSMISSION
Posted by Gorillamydreamz at 10:24 AM No comments:

Scott Pilgrim's Progress: No butts about my uneventful behind the scenes non-peek. 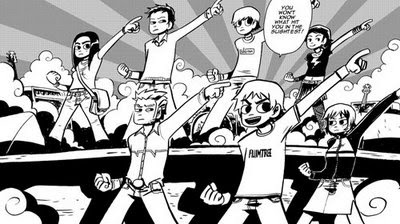 Working in television affords me many moments of having my various entertainment interests cross-over. 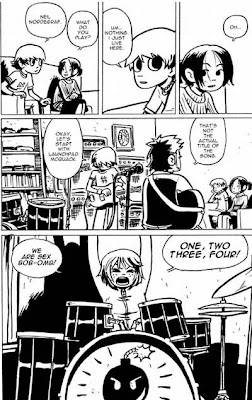 I was at a meeting last week in the production offices of Heroic Film's coming YTV sitcom, How To Be Indie, starring Degrassi's Melinda Shankar in the title role. The show looks really funny and well-paced. It's quite beautifully shot and the sets are terrific.

As we walked and talked on my tour, we slowly passed through a lunch room for the ultra secret Scott Pilgrim movie shoot. It seems they're shooting in the same studio building at Cinema City. 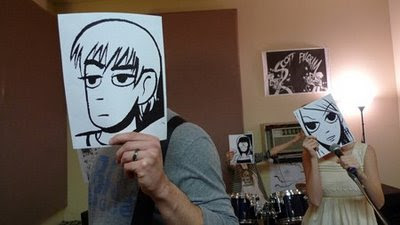 I wish I could say I saw some of the sets or props, an actor, or even director Edgar Wright. But all I saw was an eerily empty lunch room. I hastily formulated a plan to sit in every single chair so that I could, with a great deal of certainty, know that I had shared bum space with every actor in the film. Unfortunately, before I was halfway through my guide had finally noticed I was missing and quickly steered me back onto the proper path and out of no fan's land. 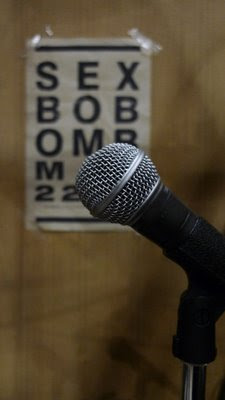 So sadly, I have no behind the scenes secrets to share. No brief encounter with stardom. But I sat in half the seats. That's a fifty-fifty chance I've shared bumspace with Micheal "Scott Pilgrim" Cera, Ellen "Knives Chau" Wong, Brandon "Buns of Steel, er, Man of Steel" Routh, or Mary Elizabeth "Ramona Flowers" Winstead . 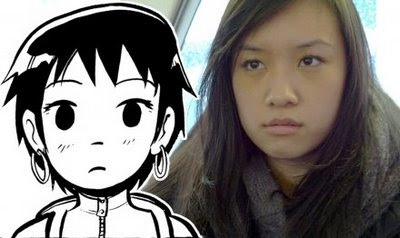 So like you, I am left only with the delightfully cryptic teaser photos Edgar has been leaving on his www.edgarwrighthere.com blog. Creator Bryan Lee O'Malley has some breathless updates on his blog as well.

How cool is it that Sloan's Chris Murphy appears to be coaching the actor's on their performance as band, Sex Bob-ombed? 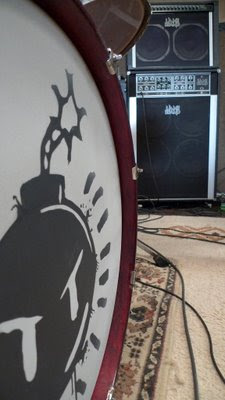 According to this article at www.torontoist.com, a few Canadian bands have already been tapped for the soundtrack.

True to the huge role music plays in the novels, so far, three of Toronto's biggest musical exports will be involved in filming: Wright confirmed in an Eye Weekly interview that, so far, Metric and Broken Social Scene are involved (Metric is said to be contributing an unreleased track, "Black Sheep," to the soundtrack, but BSS's contribution isn't clear). Sloan (originally from Halifax, but based out of Toronto for almost ten years now) are involved as well, although the level of commitment has not been revealed. Based on Sloan bassist/vocalist/sometimes-drummer Chris Murphy's frequent appearance in director Edgar Wright's updates on his site, and assuming he is not attempting to play a teenager in the film, a logical guess would have him coaching the actors on their characters' instruments for their live performance scenes. The Playlist rolls the dice and lands on renowned producer Nigel Godrich (Radiohead, Pavement, R.E.M.) as the film's music supervisor. (Rolling Stone makes mention of Godrich's involvement as well, and claims he requested the Metric song.) 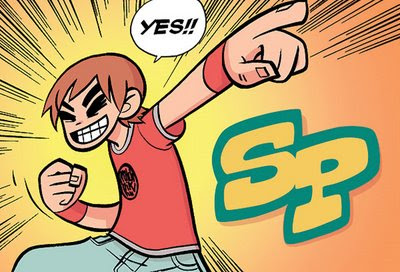 Despite all the hype surrounding the Watchmen movie, I just can't get up any enthusiasm for it. I suppose it's because the graphic novel didn't rock my world the way it did for so many fans. I enjoyed it and recognize what made it great. But it wasn't high on my re-read list.

This is the film I'm salivating for! 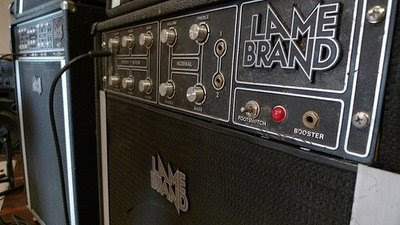 *An update: It's official. The film has officially launched its official Scott Pilgrim Vs. The World official website officially. Check it out here!

And of course, there's the newly launched Youtube page, here.

Posted by Gorillamydreamz at 6:01 AM No comments: