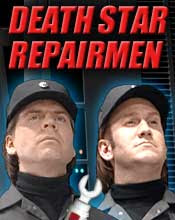 After many challenges with hosting and hackers, Darryl has moved the site and relaunched. So it's a good chance to share the film with all of you.

He's also relaunched a site I created to support his film. It's The Imperial News, the official newspaper of the Death Star and the Galactic Empire. I did articles, recipes, product reviews and fake comics etc. The site is back on the net here in its new home.

My work on The Imperial News eventually inspired this very blog, rebelalert.com. I still hope to find time to draw Star Wars based comics and gag stuff, in addition to writing about sci-fi and fandom.

But in the mean time, enjoy the dry humour and ridiculous bliss of Death Star Repairmen once again!, thanks to the fantastic folks at TheForce.net.

END TRANSMISSION
Posted by Gorillamydreamz at 7:37 AM