The Universe A Trifle? Pt. 2 - Actually, the universe is a raspberry donut

The Simpsons explain the universe once and for all.
Welcome to the rebellion.

Last time out we discussed the discovery that the universe, or at least parts of it, tastes like raspberries and smells of rum. We then touched on a seemingly innocent Simpsons episode in which Homer posited to Stephen Hawking that the universe was a vast donut, intriguing the animated cosmologist enough to contemplate stealing credit for the supposition. 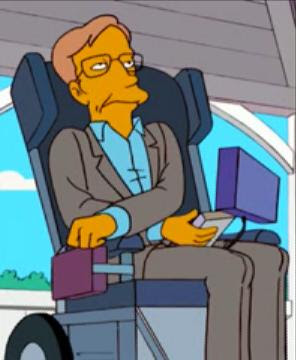 Is a mention on a universally beloved animated sitcom enough evidence to suggest that our galaxy is a giant, gourmet dessert? Perhaps not yet, but scientific theories based on less substantial food evidence have eventually proven themselves right. I’m taking to you, Isaac Newton’s apple tree. The truth is that despite starting as a throwaway joke, Homer’s Donut Theory would prove prescient.

Let’s take a larger bite out of this conundrum and see if there is more here to chew on.

And no, I will not apologize for all the foodie wordplay. How often are opportunities like this presented to you on such a gilded, silver platter? 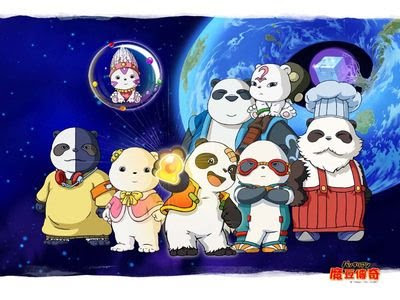 I discovered the first evidence of the Expanding Donut Theory in a quirky little Taiwanese animated program I provided English adaptations for several years ago. Pandalian featured a group of cuddly, not-so-bright, panda heroes who were trying to protect their world from the evil King Audie, who wanted to turn the whole planet into a shopping mall. The entire series takes place on Pandalia, a world shaped like a giant donut in space, complete with icing and candy sprinkles. 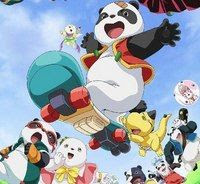 To this day, the donut world with icing and sprinkles never fails to make my writing partner smile. Mmmm, sprinkles. 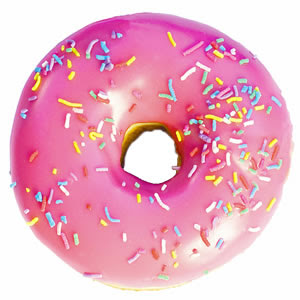 Whether astrophysicists, cosmologists, or mathematicians were inspired directly by Homer Simpson to consider a new shape for the universe is debatable. But one things is sure: as computer modeling, advances in deep space astronomy and sheer computing power have developed over the last decade, scientists have been given the opportunity to explore radical, alternate theories on how our universe came to exist and what shape, and taste, it takes.

On March 11, 2003 (my birthday), the New York Times printed a Dennis Overbye article with evidence that Homer’s theory may be a more than a cosmic joke and in fact, could answer certain questions astronomers have held for a long time (“Universe as Doughnut: New Data, New Debate”). NASA’s Wilkinson Microwave Anistrophy Probe had been recording the pattern of microwave radiation ‘heat’ that is believed to be the afterglow of the Big Bang. From the mountain of data retrieved, scientists were attempting to finally “test speculations about the shape, or topology, of the universe that until recently have been relegated to the abstract mathematical margins of cosmology.”

According to the article, the new evidence suggested the universe could be much smaller than previously thought. That played some havoc with the favoured theory of “an infinite universe with ordinary Euclidean geometry”. One shape that fit nicely with the new findings was a closed circle donut-shape, or in mathematical terms, a torus. 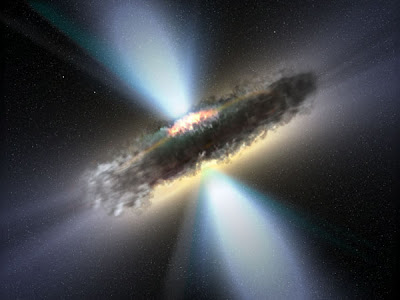 More Donuts! This picture of a donut-shaped celestial gas cloud with
a black hole filling was published by NASA on July 24, 2004. It
illustrates their findings that such clouds may ring many
of the more massive black holes.
Overbye helps explain the concept by comparing the findings to an early video game similar to Asteroids:

"The simplest of these compact universes is something called a 3-torus, a doughnut wrapped in three different dimensions... In two dimensions it works just like the Spacewar screen.

…Although cartoonish in appearance, the game was amazingly faithful to the laws of physics, complete with a gravitational field that affected both the torpedoes and the rockets. Only one feature seemed outlandish: a ship that drifted off the edge of the screen would reappear on the opposite side.

Imagine that the Spacewar screen is wrapped around to form a cylinder or a section of a doughnut so that the two edges meet.

Rather than being infinite in all directions, as the most fashionable theory suggests, the universe could be radically smaller in one direction than the others. As a result it may be even be shaped like a doughnut."

''There's a hint in the data that if you traveled far and fast in the direction of the constellation Virgo, you'd return to Earth from the opposite direction,'' said Dr. Max Tegmark, a cosmologist at the University of Pennsylvania.

The idea of a donut-shaped universe had been floated before but did an offhand comment by the Simpsons gave it more resonance in the public mind and perhaps in the mind of the scientific community? There are definitely Homer-ish elements to the scientific reasoning quoted by Overbye’s article.

Since cosmologists have had difficulty calculating how an infinite universe could have come to be out of the current model, they assume the universe may find math hard as well. A Homer approach if ever I heard one:

“Nature, they contend, might have had an easier time making a small ''compact'' universe than an infinite one, and they assume Nature would take the easy way out.”

"They assume nature would take the easy way out" is officially my new favourite quote. Dr. George Smoot, a University of California physicist at Lawrence Berkeley Laboratory, had this to add:

''The basic idea is that God's on a budget.”

Oh man. THAT is my new favourite quote. So, for those paying attention, we now know the universe is essentially a galactic slacker and likely on the Pogee.

Dr. Glenn Starkman, an astronomer at the Case Western Reserve University in Cleveland suggest the universe might grown have this way to “avoid the difficulties of the infinite.”

“Besides being difficult to create, an infinite universe is philosophically unattractive.”

Hmmm... "Philisophically unattractive" may not be my new favourite quote, but it is my new official buzz slogan.

So we now add overwhelmed, ugly, ennui-ridden philosopher to the universe’s personality. The universe is Hamlet?

What Starkman really seems to be saying is that an infinite universe if both difficult for mankind to fully grasp and pretty much impossible to fully explore and prove. And that is frustrating and inspiring all at once.

The final words in the Times article are that of Cambridge University cosmologist Dr. Janna Levin, author of “How the Universe Got Its Spots, Diary of a Finite Time in a Finite Space”. In an e-mail message quoted by the article Levin confides, ''I suspect every last one of us would be flabbergasted if the universe was so small.” Upon first hearing about the new satellite data, she summed up that combination of fear and wonder thusly. ''I tried on the idea that we were really and truly seeing the finite extent of space and I was filled with dread. 'But I'm enjoying it too.''

As more data is gathered and more theories are debated, the closest we come to truly understanding our universe may be in the hands of the quantum physicists, who have combined mathematics and philosophy into a theory that everything is unified and linked in a myriad of ways. The evidence continues to support that simple supposition. It’s the specifics that keep changing.

There are imperfections with most any theory and the celestial donut is no exception (Just go to any random physics forum). And yet you can't keep a good idea down. The donut is back in the news with more new data, as you can see here, here, here and here. And if you really want to science geek on this story, you can find more details of the theory at www.donut-universe.info.

Paul Halpern, author of What's Science Ever Done For Us: What the Simpsons Can Teach Us About Physics, Robots, Life, and the Universe, does a pretty good job of explaining the concepts at his Amazon blog here and in this Sept. 6, 2007 article for Cosmos Magazine online.

There's a more on the effort to create an accurate map of the universe here.

And just for kicks, check out this nifty, designer model of the donut universe created by design collective To22 by way of dvice.com. 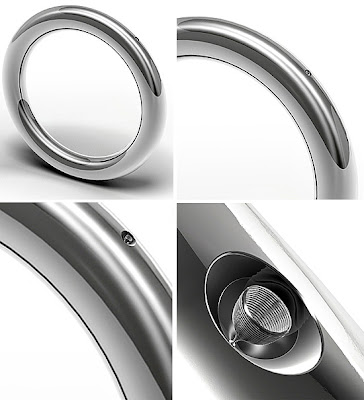 Really, this article tells us more about astronomers, physicists and newspapers than space itself. Humanity is always looking for ways to understand our world and metaphors and comparisons are a great tool to get across the complex math behind many of these theories. When a surprising metaphor captures our attention and has a link to an insanely popular television show, well now a paper’s got a hook to lure readers in with.

Thus the donut universe gets more attention than the orang- shaped universe or the saddle-shaped universe. But those simply lacked that extra zing. If we had footage of Gene Autry or Toby Keith singing plaintive, cowboy tunes about their trusty saddle universe, we’d find it in the Times. Or at least a blurb in People.

Because all these comparisons are easy to imagine and so evocative, I now have a very personal picture of the universe. A giant hand-shaped nebula grasping a donut-shaped universe with a raspberry rum filling and a Milky Way icing.

Delicious. If someone get me the math on that concept I'll be in my office.

There’s a reason they’re called “theoretical physicists”. Much like philosophy, cosmology is an ever-flowing discussion of the nature of man and his world that can never truly reach a conclusion. No one can ever fully know the shape of the universe because we simply can’t see that far. The new ability to gather better evidence fuels the desire to find new explanations and indeed, new questions.

Our final thought, and the universes final moments,
are courtesy of the Simpsons Treehouse of Horror XVI.
END TRANSMISSION
Posted by Gorillamydreamz at 5:08 AM