Giant Ant Colonies Take the World - Mad Scientists the World Over Say, "We told you so!" 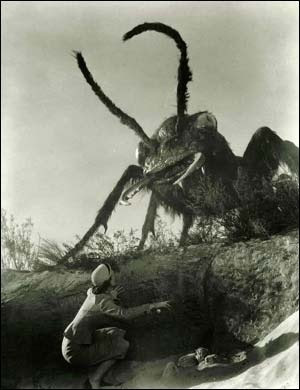 Thanks to our friends at the newly revamped Hardcore Nerdity, we've learned that the BBC has at last confirmed what paranoid sci-fi fans the world over have suspected for years.

Giant Ants colonies are taking over the Earth!

According to the BBC online a single mega-colony has inhabited much of the world and mankind is responsible.

Argentine ants living in vast numbers across Europe, the US and Japan belong to the same inter-related colony, and will refuse to fight one another.

The colony may be the largest of its type ever known for any insect species, and could rival humans in the scale of its world domination. 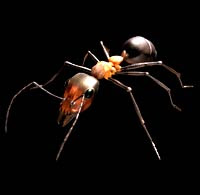 What's more, people are unwittingly helping the mega-colony stick together.

Argentine ants (Linepithema humile) were once native to South America. But people have unintentionally introduced the ants to all continents except Antarctica.

These introduced Argentine ants are renowned for forming large colonies, and for becoming a significant pest, attacking native animals and crops.

In Europe, one vast colony of Argentine ants is thought to stretch for 6,000km (3,700 miles) along the Mediterranean coast, while another in the US, known as the "Californian large", extends over 900km (560 miles) along the coast of California. A third huge colony exists on the west coast of Japan.

Eiriki Sunamura of the University of Tokyo led a team of scientists on Japan and Spain in testing ants "from the main European super-colony, from another smaller one called the Catalonian super-colony which lives on the Iberian coast, the Californian super-colony and from the super-colony in west Japan, as well as another in Kobe, Japan."

When rival ants from smaller colonies were brought together they behaved in the expected territorial manner, fighting where they couldn't simply avoid one another. However, when ants from the supercolonies in Japan, Europe and the ginormous colony in California came together, they displayed none of those aggressive tendencies, rubbing antennas like kissing cousins.

In short, they acted as if they all belonged to the same colony, despite living on different continents separated by vast oceans.

The most plausible explanation is that ants from these three super-colonies are indeed family, and are all genetically related, say the researchers. When they come into contact, they recognise each other by the chemical composition of their cuticles.

"The enormous extent of this population is paralleled only by human society," the researchers write in the journal Insect Sociaux, in which they report their findings.

However, the irony is that it is us who likely created the ant mega-colony by initially transporting the insects around the world, and by continually introducing ants from the three continents to each other, ensuring the mega-colony continues to mingle.

It's kind of like finding out you went to the same Frat House with a stranger. Suddenly, you're friends for life. 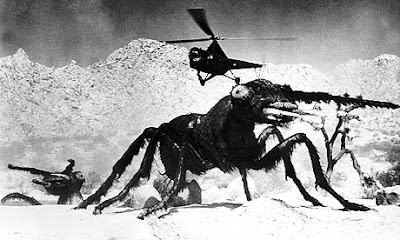 Personally, I'm looking forward to a world ruled by our formicidae overlords. I suspect our cities will be run far more efficiently with a lot less waste. Toronto is currently in the midst of summer strike by city workers, and the garbage is piling up. Ant rulers would have that that trash recycled and moved out in no time, and negotiators from both sides would have been eaten or reassigned new duties.

It seems those fifties sci-fi grow more and more prophetic every year. From the "Invasion of the Body Snatchers" pod people we meet at our high school reunions to the "Village of the Damned" experience I had at every niece and nephew's birthday party in the last fifteen years, you can't take a step without without realizing how right paranoid 50's Hollywood was. 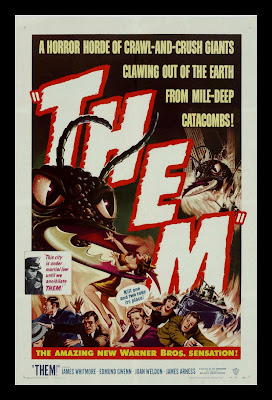 And in the case of "Tarantula" and "Them!", two movies based on large, multi-legged creatures growing to gigantic proportions and running amok, Hollywood only got one thing wrong. It was the colony that grew gigantic, not the ants themselves... yet.

But as the colonies grow and take over, so too will the ants. After eating themselves on four fifths of humanity they will put us to work in the sugar cane fields, maple syrup smoke houses and Sweet N' Low refineries while they gain incredible bulk from gorging themselves on the remaining stock left behind in every fast food restaurant in the world. They may grow so rotund they won't even be able to march to power. We'll have to carry them there in great dung and leaf litters.

Unfortunately, none of this is likely to come to pass. Timing is everything in the ant eat ant world of global domination. And I'm afraid our insect foes, the Linepithema humile formerly known as Iridomyrmex humilis, may have waited too long to make their threat known. You see...

The jellyfish beat them to it. 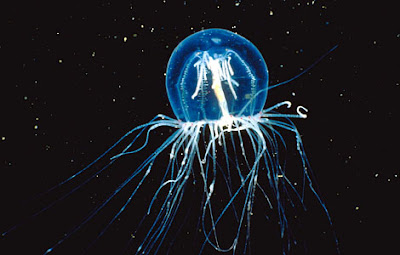 Last year National Geographic's Explorer, which gets more hyperbolic with each passing season,informed the world that the Jellyfish Invasion has begun! According to Explorer, the Attack of the Killer Bees and the Monster Fish of the Congo were just the start. The Jellyfish have already begun their assaults, striking around the world in overwhelming, icky, globby force.

A brave Scottish Navy Seal engages in one on one combat

with an elite jellyfish warrior. Who will survive? Photo: Paul Sutherland

The National Science Foundation in Arlington, Virginia confirms the danger in a report entitled "Jellyfish Gone Wild". Again, most of the causes for the rise in the jellyfish population are man made: overfishing, pollution, climate change and the decline of their main predator, the sea turtle. The jellies not only are one of the only creatures able to survive and thrive in the 400 unoxygenated dead-zones in our oceans but they also attack fish mankind needs to feed their sushi habit. 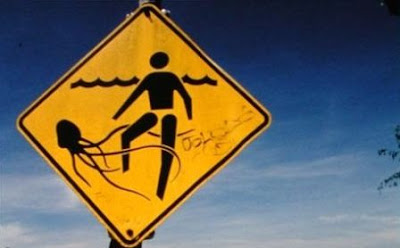 This "Beware of Jellyfish Invasion" sign in Australia ain't gonna cut it.

According to Oceana.org has also written about the wave of jellies and describe a 1999 incident in the Philippines where the jellies clogged the intake pipes of a power plant and caused a massive blackout. Obviously, their plan of attack is to sow fear and terror and then float on to victory.

Reports have been coming in form across the globe. Attacks have occurred in Hawaii, Boston, Spain, and Ireland. The unprecedented Irish assault wiped out 100, 000 farm salmon in a jellyfish massacre involving "billions of jellyfish drifting in a 10 square-mile swarm". The attack has Scotland's salmon producers on high alert waiting for an attack on their own fish farms. 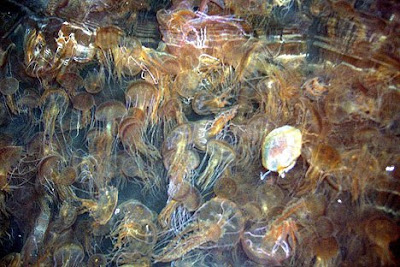 Leave it to those hearty kiwis in New Zealand to be blasé about the whole thing, insisting their Queensland beaches are as safe as ever. But the rest of the world? Not so much. If only we could summon Gamara, the 75-foot flyin', fightin', frisbee-like, Japanese, tusked, sea turtle and friend to all children. He could halt this deadly invasion with week's worth of brunching on the gelatinous beasts. 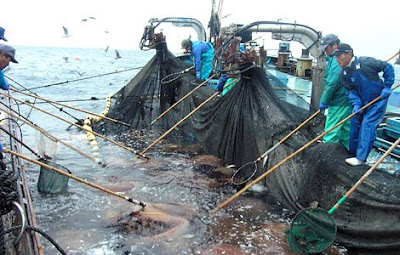 These Japanese fishermen long for the simpler days

when all they had to worry about was Godzilla capsizing their trawler.

So sorry to break it to you ants. Your patient takeover was brilliant ans subtle but the Jellyfish beat you to it with chutzpah and sheer strength of numbers. Let the battle for supremacy over land and sea begin!

Posted by Gorillamydreamz at 6:14 PM