We wish it weren't so, but Darth Vader, despite six movies in which to build on his early badass promise, has failed to live up to his evil potential. 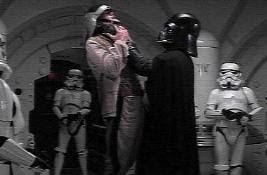 Whole lot of choking going on.
In the first post on this topic, we discussed Darth Vader's initial, awe-inspiring appearance in Star Wars and his subsequent development from brutal, galactic overlord to a truly memorable and adaptable cinema villain.

We may have gone back to the theatre time and again to see Luke, Han, Chewie and Leia triumph, but it was Vader we truly couldn't get enough of. Every kid on the block went around breathing heavily through their mouths or into soda cans and juice bottles, imitating Vader's raspy, evil eloquence. 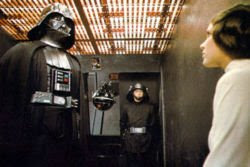 This was a guy who brought tough love parenting to a new level when seeking answers his own daughter. "Why weren't you home by curfew last night? I want to meet the boy who's taking you to the prom. what was that, no? Okay, fine. No prom. No planet!" 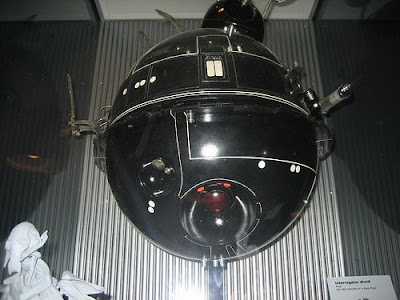 He has also showed a willingness to use old techniques (Drugs, interrogation droids, a good old-fashioned invisible neck squeeze. Classics all.) yet also take advantage of new technologies (the Death Star). All the while showing his disdain for overconfidence with any of these things.

"I find you lack of faith... disturbing."
Well, we didn't know Leia was his daughter at that point but it made a scary scene even more compelling and creepy in retrospect.

Anticipation for more of this villain ran high after Star Wars. Did Darth Vader survive being blown into space? What kind of malevolent retaliation would he inflict on Luke and the rebels for heaping such an indignant fate upon him? A generation of kids, both young and old, were in a perpetual fervor of expectation while they waited for the second installment of Lucas’ franchise in the making.

During a re-release of Star Wars to stir audience interest for the forthcoming Empire Strikes Back, I remember slowly shuffling out of the theatre as the credits rolled. I would have preferred to stay for the entire credits, letting John William’s heroic Star Wars score carry me through to a proper sense of denouement but the other patrons in my aisle made that impossible.

As the final credits rolled off the screen, light from the screen suddenly filled the cinema. Preview scenes from the new movie burst onto the scene! People dashed into their seats to take it all in.

We waited with baited breath through incredible shots of space battles, an eerie swamp plant and incredible machines fighting for dominance on a snowy planet, and for confirmation of Vader's return. 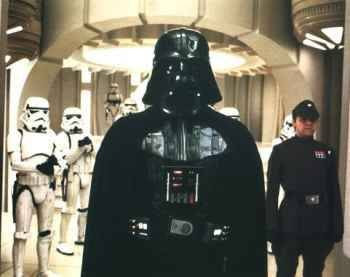 Back in black!
At last, a tantalizingly quick shot of the rebels appeared. We hushed as Leia, Han, Chewie and their droids entered a white room. At the end of long table, the Sith Lord Darth Vader rose, taking them, and us, completely by surprise. Han drew his blaster only to have Vader telekinetically snatch it form across the room with a wave of his gloved hand. The cheers were unbelievable!

Few screen villains will ever have that kind of impact of viewers.

Let’s face it. A good hero is nothing without a good villain. Batman isn’t playing with a full deck without his Joker. Dirty Harry wouldn’t have made such a sudden impact without his initial run-in with Scorpio. And Arnold Schwarzenegger was the hero and villain of his most famous film franchise. I’ll be back… and back… and back.

As we discussed in Part One of this discussion (Oh so long ago.), Vader showed remarkable adaptability and grew more efficiently ruthless in The Empire Strikes Back. It was a joy watching the Sith Lord learn from the typical mistakes so often found in middle-management (over-delegating, underestimating the experience and savvy of former mentors, ignoring the ability of young upstarts to bounce back) and take his first, tentative steps to rivaling the Emperor himself for space smarts and strategic thinking in this, the first of many sequels. 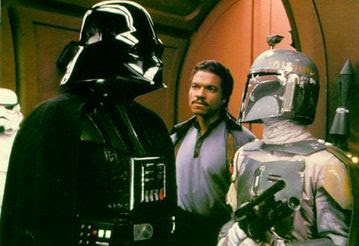 Darth realizes he is only one man and so, like any good manager, delegates. Hiring mercs who specialize in finding needles in cosmic haystacks for fun and profit is sensible step. It not only increases the odds of success, but these men are able to search the crevasses of space, the lowly, dirt-covered planets and systems where fugitives think they can hide.

A Star-Destroyer pulling into orbit led by a guy in shiny armor is sure to give anyone on the run advance warning. But the bounty hunters fit right in on the fringes of galactic society. No one sees them coming.

Unlike the Jedi, who rely on the Force and their own wits to persevere, the Sith make every effort to manipulate events and others to do their dirty work for them. Despite the blow to his pride, Vader’s plan of action is wholly in keeping with these tactics.

And it quickly pays off.

Boba Fett thinks much the way Han Solo does and tracks the Millenium Falcon to Bespin. In fact, he anticipates Solo’s flight plan. The audience is expecting Vader and his forces to arrive in pursuit of Han. But when Vader rises at the end of Lando’s Cloud City Dining Room, we are as surprised as the rebels. He’s been there all along and even had enough time for a quick, one-sided negotiation with Lando Calrissian. 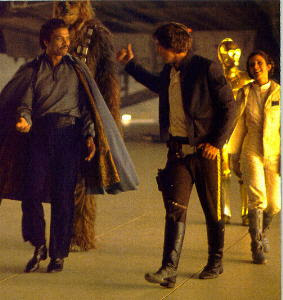 Every step in this film, Vader becomes more dangerous. In his view, actions have consequences and he’s just the judge, jury and executioner to carry them out. He has no compunctions about encasing Han Solo in carbonite to lure Luke to a deadly confrontation. Vader toys with Luke, sharing the shocking secret of his true lineage and in so doing, forces the audience to rethink everything they’ve seen back through TWO MOVIES! 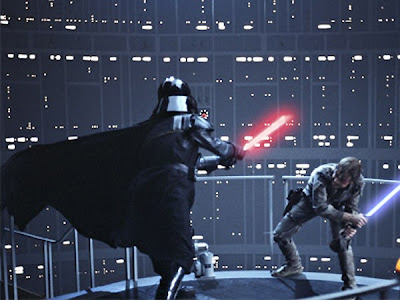 Give the man a hand.
Sadly, after almost achieving “Evil-Villain of the Month” greatness by freezing Han "That Annoying Thorn in my Armor" Solo and cutting off the hand of our eager, young hero, the menacing, adaptable Darth Vader of The Empire Strikes Back would wave goodbye and disappear forever at the end of the credits.

Empire Strikes Back attained that rare watermark for a sequel. It built on and outdid its predecessor without copying it. Much like the Godfather II and the antithesis of Die Hard II: Die Harder and every Friday the 13th movie ever made. The characters grew up, the stakes grew higher and more personal, and the villain truly grew into an even greater threat than he had presented in the first film. 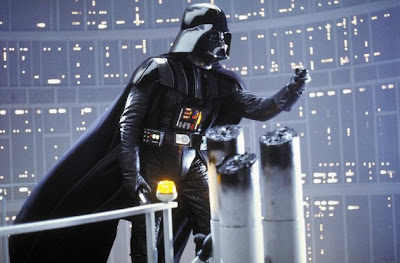 Unfortunately, though The Empire Strikes Back solidified Darth Vader’s place as the scariest bugger in a certain galaxy far, far away, that particular Sith Lord would not appear in Return Of The Jedi. His cape, helmet and re-breather were turned over to an indecisive, pencil-pushing, ineffectual, middle manager.

It’s tragic tale of corporate ennui. Many up and coming professionals hit the glass ceiling at work after a meteoric rise to prominence. With no room for advancement as long as the Emperor hold the reins of power, even a Sith Lord may choose to coast.

Next: The downsizing of Vader.

END TRANSMISSION
Posted by Gorillamydreamz at 8:00 AM