Welcome to the rebellion. Are you ready to ROCK? Death Star Repairmen has been immortalized in rock and roll history! Rockabilly fan band Death Star Repairmen has released a CD of Star Wars inspired, rhythmic rock and roll to showcase their brief but storied history. According to bandleader Captain Zorikh, the self-proclaimed Time-Traveling Bard and Three Chord Monte... 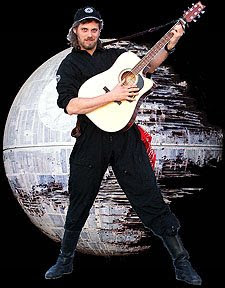 "The Death Star Repairmen are a small group of dedicated servicemen who, after a lengthy tour of the Imperium's greatest space station repairing the controls that extend the bridge, finding out what shut down all the garbage mashers on the detention level, and filling in all the blast points in the corridors, like to relax with a few drinks and some good music.

They play an entertaining selection of songs including "Stormtrooper Blues," "Come on, Little Jedi," "The Nerfherder Song," "Red Five," and "Flying Saucers Rock & Roll." Occasionally they extend into ballads of other famous creatures with fuzzy, wooly toes. A good time is guaranteed for all who join them in their post-work revelry.

For a CD of the Death Star Repairmen (and other works by Captain Zorikh) go to The Watch This Space Catalogue.

Whew! Capt. Zorikh is a one-man entertainment empire with a documentary about a grand battle staged by his chapter of the Society for Creative Anachronism, his own series of mini-comics, several music CD's based on his comic strip Ironfowl, a solo CD and most importantly, The Death Star Repairmen's debut album "A Night In Mos Eisley"! Best of all (and proving what a honourable Jedi the good Captain is), Zorikh acknowledges the band took its name from Darryl Gold's fan opus and has posted a huge thank you and link to the DSR website on his own site!

The name of this musical combo was inspired by the brilliant and funny short film "Death Star Repairmen" by Darryl Gold. Visit his website by clicking on the banner below:

(Aside from this inspiration, this combo has no official ties with this video or the makers of it, though we wish we did, 'cause it's a really funny piece of filmmaking! It's an excellent website too! And I'm not just trying to suck up to the Mr. Gold because I hope he doesn't sue us for using the name, it's really good. No, I mean it...)

And even better, the good Zorikh's mama raised him right. He e-mailed Commander Gold for permission to use the name. We foolishly thought the band was a one-off! Congrats on building a following and this summer's convention tour, guy.

Shazam! He's also a Captain Marvel scholar. And I wasted time in university on psychology and theatre history for non-majors.

Rebel Alert salutes you Captain. Welcome to the rebellion!

END TRANSMISSION
Posted by Gorillamydreamz at 4:29 AM