Welcome to the rebellion. Caught an article in last weekend's National Post on a Star Wars, Mandalorian-themed wedding ceremony held outside the this year's San Diego Comic Con. 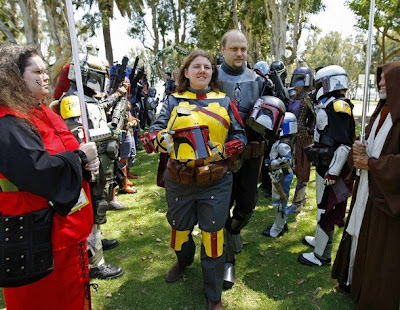 So often people view fan-themed events with this image of overgrown children with no social skills refusing to be responsible adults and dressing up in crazy costumes. People like to dismiss the fannish enthusiasm as worthless or misguided. But there's a lot happening under all that colourful gear.

The truth is there are few more social events than a cosplay (costume play) or a costume club event . They're the ultimate mixer. It's easy to identify who digs what you dig and you have automatic conversation starters like, "How'd you get the metallic fins to curve at the right angles to really sell the rocket pack?", "Do you believe in adapting an actual assault rifle model, carving it from a single piece of wood, or detailing over a resin cast?", and even "What the heck are you?"

We all love to talk about our favourite shows or books but sci-fi fans take it further, forming friendships around these things that can last a lifetime. And they are engaged in the world in a unique way. Sci-Fi fans love to talk about the transformative power of ideas and are probably the most positive, can-do people you'll ever meet.

Heck, Cosplayers and Costume Club spent months, weeks and hours hand-weaving the fur into their Chewbacca outfit. You think starting a recycling depot in their neighbourhood is beyond them? They're self-starters and always look on the bright side, eager to change the world into the futuristic utopia they see played out in the shows and novels they love.

I admit, I almost dismissed Tenille and Thomas Kuhlman's Mandalorian (Boba Fett's people) wedding myself. But as I read through the article, and later looked at footage and pictures here, I realized this matrimonial union had much in common with my own wedding last November.

My new bride and I have had quite a roller-coaster year. After much patience on her part and many stalling excuses on my part, I asked my bride to marry me in a convulsion of nervous stuttering. Why was I nervous when I already knew her answer (which she helpfully provided me with years before)? Perhaps it's all about Tom Hanks and Ron Howard Apollo 13 rule; just because you know how it ends doesn't mean it isn't a wild ride. 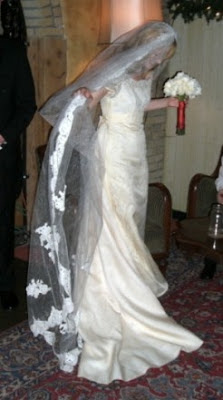 My bride-to-be lived across the Rim, 500 miles and a country away as the shuttle flies. Due to health concerns we were suddenly forced to deal with, I became our de facto wedding planner. As she kept working and dealt with the medical droids (and some of them may as well have been droids considering their inhuman bedside manner), I flew back and forth to help her, worked and made wedding arrangements.

Our wedding was extremely small and we avoided any company or service that was part of the wedding industry. We booked a beautiful restaurant/pool hall/corporate event place that could do the wedding and the dinner, made our own music files and hooked up our computer to the sound system. We also conscripted friends and family to help decorate and found an old friend who used to own a flower store to help out with the floral arrangements and the bouquet.

The rings were antique found on-line, thereby avoiding blood diamonds and questions regarding the ethics of the Canadian diamond industry. Even the dress was found on-line and fit my love perfectly. And Jill (my new wife) even wrote a song about planning the wedding while going through Chemo. It's called Chemo Bride (below). So the entertainment was unparalleled. And the cake? A huge ice cream cake from Baskin-Robbins. and we defy to find a tastier wedding cake anywhere!

Become a guest at my wedding and enjoy my wife's brilliant song, "Chemo Bride"!

I remember how proud we felt after it was all over. We had created a perfect, intimate wedding on a reasonable budget that was full of personality, beauty and joy. Since we paid as we went we also wouldn't be paying off debt on it for years to come! That DIY (Do It Yourself) spirit is exactly the kind of joyful. "let's get it done and celebrate life" kind of feeling I saw at this Star Wars wedding.

Tenille and Thomas were actually married months before but for both of them , this was the true celebration they wanted. It was something unique to them. Something that included their guests in the spirit of creation and experiencing something unique.

And that is what you're really seeing when you see pictures of fans in their costumes at events like these. People who are celebrating possibility. People who are getting that rare opportunity to let that optimistic spirit inside them out. They're letting the world see that we don't have to settle for the mundane every day. We can believe in the power of imagination inspire us to greater heights.

Isn't that worth looking a little goofy for? Posted by Gorillamydreamz at 8:32 PM